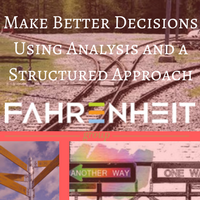 Running a business requires you to make decisions every day. Some are simple and straightforward, but others are of major importance with significant impact. Of course, you want to make the best choices you can, since these will affect your company’s performance and, therefore, value. You’ll almost never have perfect information, but you can improve your odds of making a good decision by making sure the right people are involved and that they take an objective approach in making the decision.

Who’s In Charge? If an issue is important and complex enough to be considered a major decision, it is critical to make sure that you have the appropriate people making the decision. The RASCI Decision and Accountability Model is a popular method used to assign these roles and responsibilities and help ensure the best outcome. The roles can usually be assigned fairly easily. Under this structure, the participants in a decision are:

R – RATIFIER – This is the person who defines the boundaries of the decision and then makes sure the decision falls within those boundaries (but they do not make the decision). Typical boundaries include: financial limitations, time frames, and alignment with other objectives. This is the most senior-level person in the decision-making group, and in a smaller to mid-market company will usually be a C-level executive.

A – ACCOUNTABLE – This person actually makes the decision and is responsible for making sure the decision addresses the issue. They are also responsible for the action planning and outcome. Ideally, a single person should be Accountable. Having multiple Accountables tends to slow down the process and make it easier to avoid personal responsibility. For major decisions, this role normally goes to a department leader or trusted senior person in a department.

S – SUPPORT – A Support role goes to those who have to complete one or more task(s) that are part of the decision process. This most often includes gathering and presenting information, as well as making recommendations.

C – CONSULT – The Accountable has to make sure that the right people know about an upcoming decision and can provide input. Those who are able to provide expertise to the Accountable in making the decision are given the Consult role. This differs from the Support role in that there are no specific tasks to be performed.

I – INFORMED – The role of informed goes to those who will be affected by the decision and will play a part in implementation. They need to be brought into the loop, typically after the decision is made.

While the RASCI approach might seem pretty involved, as it gets used the management team will learn to employ it pretty quickly (I have seen it take just 5 minutes to determine the roles, with everything fitting on one sheet of paper), and it will result in more effective decision-making and execution since there is clarity around everyone’s roles.

What Information Do We Have? Sometimes the hardest aspect of decision-making is basing it on facts instead of opinions and emotions. In the absence of facts, the decision is left to be made using anecdotes or “gut-feel.” There is also risk that a decision can then be driven by someone with the best influencing skills and/or emotional involvement. The team driving the decision should discuss what information would be ideal to have and where it can be obtained and how.

If at all possible, the potential impact of a decision should be tested. If there are one or more metrics or KPIs that the decision is expected to affect, it is good practice to set up a test to see what results are observed. If the impact of the decision is unexpected, there will be an opportunity to modify or cancel the decision before rolling out company-wide changes. A classic example of the risk of not testing came back in early 2012 when Ron Johnson, the newly-appointed CEO of JC Penney who had just come over from Apple, began making dramatic changes. He abruptly scrapped JCP’s practice of offering discounts, heavy promotions, and coupons, moving instead to everyday low pricing. Customers rebelled, traffic and sales declined, and the company was forced to reverse course. Ron Johnson was gone after 17 months.

A simple structure that can be used for testing is to break out a small portion of the business (for example, a geographic area) and implement the change there: the “test markets.” The remainder of the business, where no changes are made, will then serve as the “control.” The performance (based on the agreed-upon metrics or KPI’s) can then be compared over a period of time that spans before and after the change is implemented in the test markets. These results should provide management with objective information to evaluate and decide whether to proceed with the idea being tested, modify it and do more testing, or abandon the idea.

Conclusion. An important part of executing well in your business is making the best possible decisions which will affect performance. We have discussed that the two elements of this are making sure the right people are involved in the decision, and that they make the best use of available data in order to be objective.

This completes Part C of Creating Value through Better Planning and Execution, discussing ways to make better decisions and get improved outcomes for your business. The first two parts of this series are available here:

Tom Moran is a Managing Director on The Fahrenheit Group’s Finance and Advisory team. This team includes CFO’s, COO’s, and CEO’s with a broad range of experience creating value in a variety of businesses at every stage and can offer your company the right level of talent exactly when you need it.