5 Monkeys in a Cage (And One Important Business Lesson) 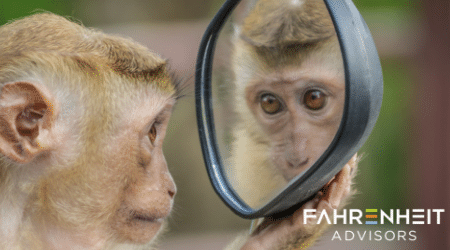 In terms of summer reading, I’m not a big fan of fiction. In fact, looking back at my reading list over the past decade I’d have to say I’ve definitely got a genre. To the exclusion of almost everything else, I read business self-help books. I don’t know why this is (what is so compelling about mobile cheese, anyway?) but the one thing I do know for sure is that I never get tired of reading about spectacular moments in business; even more so if they were spectacular failures. Icing on the cake is when a great business lesson is illustrated by members of the animal kingdom. Make those members of the animal kingdom monkeys and you’ve got gold! So, to that end, I present my all-time favorite business lesson: FIVE MONKEYS IN A CAGE.

In 1966 at the University of Wisconsin-Madison an experiment was staged involving five monkeys in a large cage. In the middle of the cage, a ladder was placed leading up to some hanging bananas. As the experiment began, one monkey spotted the food and began climbing the ladder.  As he did, however, the researcher, Gordon Stephenson, sprayed him with a stream of cold water. He then turned to all the other monkeys in the cage and sprayed each and every one of them as well. The monkey on the ladder scrambled away without a banana and now all five monkeys were left cold and wet. Nevertheless, after a while, banana temptation beckoned and another monkey attempted to climb the ladder. And once again, the researcher sprayed the adventurous monkey on the ladder as well as each of his cage-mates. What happened next was surprising to the researcher but not wholly unexpected.

When a third monkey attempted to ascend the ladder, the other monkeys, realized that what came next was cold water for all of them. They wanted to avoid this discomfort. Apparently when monkeys are aware that discomfort is imminent, they may not pause to “use their words” … they cuff, thwack, pummel and drub until the errant monkey gets the message. The monkey climbing the ladder was thus pulled off and educated by the other monkeys.

The second part of the experiment involved removing one monkey and replacing it with a new monkey. As would be expected of the newcomer, upon spotting the bananas, he naively began to climb the ladder. And just like the last climber, the other monkeys pulled him off and schooled him.

Here’s where it got interesting: The researcher removed a second one of the original monkeys from the cage and replaced him with a new monkey. Again, the new monkey went for the bananas and, again, the other monkeys prevented him from climbing to the bananas – including the monkey who had never been sprayed.

By the end of the experiment, none of the original monkeys were left and yet, despite none of them ever experiencing the cold, wet, spray, they had all learned never to try and go for the bananas.

And with that, one of the greatest business lessons of all time was born.  And it couldn’t be more relevant today. Even among a number of my own clients this condition is prevalent.  Invariably, as we examine existing systems in an effort to install and upgrade to new systems, we find processes that make no sense but are executed nonetheless. Upon closer inspection, almost invariably, the person performing the process explains, “I don’t know why I do this. It’s just the way it’s always been done. I’m afraid of what could happen if I change the process to something that makes more sense. The person who started this process is no longer here.”  Sound familiar?

It’s a powerful reminder that key processes in organizations big and small need regular examination and re-examination. As one of my mentors once told me, a process examined is a process improved. This is true of any business process – financial, operations, sales, etc. Fahrenheit Advisors stable of consultants offer expertise in these and other areas. If your business processes haven’t been examined recently, it’s probably time. We are happy to help. Take the first step today by contacting us today.

Russ Gambrel is a Director on our Finance & Advisory team. He is a CPA and Controller with more than 18 years of accounting, auditing, banking, financial, and project management expertise. At Fahrenheit, he serves as interim CFO and controller, implementing internal controls, working on system implementations, providing analytics and delivering process improvements. Contact Russ.