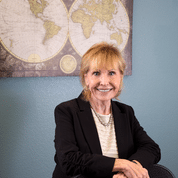 Sandy Gerdon-Johnson is a Senior Human Resources professional with 30 years of global experience in all facets of HR, including Employee Relations, C&B, HRIS implementation, Start Up Development and Implementation, OD, Training, Communications and Executive Coaching.  Sandy was a Senior HR Executive at Intel and an OD, Training & Business professional at a large underground copper company.

As Human Resources Consultant for Progress Residential, in a one-month timeframe, Sandy built in-house HR capability that had been previously outsourced and successfully managed the benefit, payroll and 401k conversion of all plans in house. In addition, she established and managed staffing functions, employee relations, new hire onboarding and orientation processes.

As Human Resources Consultant for Beazer Pre-owned Rental Homes, Sandy built and managed the HR program from the ground up, including creating and administering hiring processes, job descriptions, salary schedules, interviewing and on boarding. She established partnerships with staffing firms for quick workforce mobilization, developed the Employee Handbook and implemented new policies. She initiated new workers comp coverage and benefit plans that improved coverage at little additional cost. She set up all systems for online benefit administration, drug testing, E-verify and COBRA administration and created a robust HR section for the Company’s Intranet that allowed access to all documents.  She seamlessly transitioned to a new payroll company and managed payroll, moving  to virtually paperless processes.

As the Human Resources Vice President for The Lyle Anderson Company, Sandy’s assessment and leadership initially paved the way for a large-scale organizational Human Resources change which resulted in bringing the previously outsourced HR services back into the Company. She led the cross-geo HR team and such strategic initiatives as a new HRIS system and 401K conversion.  She oversaw the downsizing of the Company with no legal ramifications.

At Intel Sandy managed large, geographically dispersed teams with responsibilities for all HR services in both US and international sites. She  held executive partnerships with Senior business VP’s, including Intel’s former CEO and was the Senior HR Executive heading up the HR functions for groups ranging from 6,000 to 12,000 employees worldwide. She managed teams who supported over 50% of Intel’s executive staff members as well as numerous corporate VP’s. She oversaw all HR aspects of one of Intel’s largest mergers of over 10,000 employees worldwide, as well as managing various reorganizations in other business groups.

She has been involved with designing and implementing successful strategic programs including total HR service delivery, voluntary severance, organizational capability planning processes and HR/business partnership alignment models. She is a recognized champion in leading Diversity efforts. She is known for driving results through business leadership, mentoring, and innovative strategies.

She pioneered employee/management training and development programs as well as communication and quality efforts at Magma Copper Company. She was the co-leader of Magma’s investor relations office when it became a public company, with responsibilities for annual/quarterly reports and assisting in public relations efforts.